Darby Malone has trouble saying no. Hosting a children’s Valentine party at her recently renovated gallery is the last straw, and the last time she intends to say yes to anything. That is, until she meets Ben, a well-known Cape Cod artist with eyes as deep and blue as the ocean. He stirs feelings in her that have been dormant for too long. Can she afford to say yes to him?

Ben Phillips needs this gallery show. His life has been empty since his wife died four years ago, his paintings the only thing giving him solace. But his style has changed, his art completely different than the breezy shore paintings he staked his reputation on. Can he convince Darby to give him a chance – and to consider him for more than just a place on her gallery walls? Will she give him a place in her heart as well?

Coming from Cape Cod, I grew up in Provincetown, I'm always wary of books set on the Cape as sometimes the author just doesn't get it. That is not the case with Ms. O'Sullivan. She hits all the right notes about being a townie in the dead of winter. She made me homesick!

I also grew up with a grandmother who was active in the Cape art scene, especially in P-town, so I enjoyed that aspect of this story as well. Ben is a great hero. I'm always a sucker for an artist hero. Darby encapsulates all the feelings of someone who grew up on the Cape, moved away for a while, and then moved back when life didn't deliver like she had dreamed. 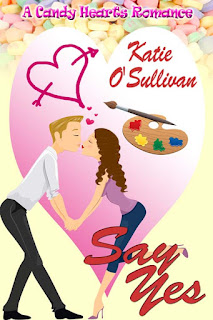 Thanks for the great review !

Fun to find out you grew up on the Cape! I live in Harwich, but my last romance (Crazy About You) is set in Ptown in the weeks before carnival.