Marry Me by Heidi Wessman Kneale


In 1905 New York City, affluent Millie Moore wants to be outspoken like the suffragettes she admires. She also wants to rid herself of an annoying and controlling suitor. For a well-brought up young lady whose mother fears her impending spinsterhood, speaking her mind is an uphill battle.

When Raymond Wilson sees Millie at a rally, it’s love at first sight. Not wanting his stutter to ruin his chances, he enchants a little candy heart to do his talking for him.

For Millie, Raymond is a breath of fresh air. And maybe, just maybe, someone she could love. But for her social-climbing suitor Guy Elliot, he’s a threat to his plans. And Raymond isn’t the only one who knows something about magic. Now the ante has been upped and Millie is the prize… 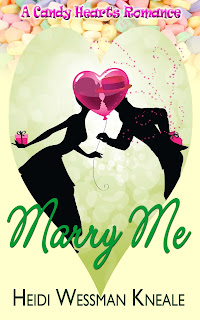 Her Grace, Heidi, the Duchess of Kneale said...

Thanks for such a beautiful review. So glad you loved Raymond.