Penny Chambers-Smythe receives her newest threatening note the day she meets Will Warren. His quiet strength is comforting and for some strange reason she instinctively trusts him. This troubles her because she’s not easily trusting. Feelings of security and familiarity begin to develop when Will’s around, so strong they puzzle her. The way he walks, the color of his hair and eyes, some of the things he says seem so familiar as if she’s known him all her life.

After bumping into Penny, Will discovers she has a stalker. Feeling an inexplicable connection with her, he delays his first assignment with Shaunessy Securities looking for missing heir, Anna Marie Daemon, He changes his decision after his initial meeting with Quentin Daemon, of Daemon Industries. Something about the case seems connected to another case he never solved.

Patti O’Manne’s first book is a tour de force combining many complicated threads and relations into one suspenseful story! Will is a true hero, a protector in the best sense of the word. Penny is courageous as she faces a past filled with secrets and a mysterious person who means to do her harm. Add in an adorable little boy and a richly drawn cast of characters and you’ve got a very satisfying read! 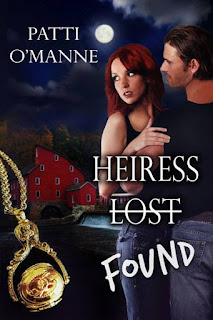