What Ian Wants, out now! Here's an excerpt! 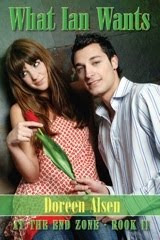 He wore his eagerness to please like a cub
scout wore his first merit badge. Her heart melted a
little more. “Coffee sounds good, but don’t worry
about it.” She reached in her purse. “I can get it.”
“No, I’ll get it. I insist.” He came from around
the table and glommed onto her elbow, then pushed
her into a seat. “Your feet must be aching. Just rest
a second, and I’ll be right back.”
Stunned, Gina had no choice but to do as he
said. Curious about the array of blue books, she
picked one up, one he had already graded. It was all
in French. The questions, the answers, his red pen
comments, all in French.
She couldn’t understand a single word. She felt
like a total doofus.
“Don’t mind those. I’ll gather them up and put
them away.” He placed the large coffee in front of
her, then moved into the booth and started to pick
up the blue books. “I feel like I’m constantly grading
papers. If I don’t keep up, they bury me.” Stuffing
the papers into the open briefcase at his side, Ian
dropped the lid. It landed with a soft thud. He looked
at her, his eyes hopeful. “I don’t know how you take
your coffee, so I brought both cream and sugar.”
Jamming his hands in his pockets, he pulled out
enough packets of sugar to put her in a coma, as well
as a handful of creamers.
She reached for a creamer. “Just cream,
thanks.” It made a hissing sound as she pulled the
wrapper off the top. “What’s up?”
Ian looked away for a moment, pulled the
glasses off his face and cleaned them with a paper
napkin. “There’s no graceful way to ask this.” He
studied his glasses before slipping them back on his
face.
“Why don’t you just spit it out?”
“Right, then.” He nodded. “I need you to marry
me.”