Andi’s new to town and looking for a fresh start in the dating department. She’s attracted to the guy she sees each morning, but begins flirting via text with Garrett, a friend of her new co-workers. Despite many attempts and determination, she misses opportunities to introduce herself to Cute Coffee Shop Guy or actually meet Garrett in person. With Valentine’s Day approaching she succumbs to the sugar rush of Candy Hearts and when ‘Secret Admirer’ continues to appear in the messages, she takes it as a sign to decide which guy is her real Secret Admirer.

Told in the first person, this book really reminds me of the best of Chik-Lit from a few years ago, only with a big update. I read this fresh off of reading Aziz Ansari's Modern Romance and Ms. Hayes' use of texting as a way the characters communicate is right off the pages of his study. In other words, it's really the way 20 somethings do this these days. It's a quick fun read! I recommend it highly! 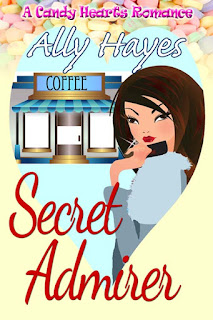 Thanks for the review and featuring my story, Doreen. I appreciate it!