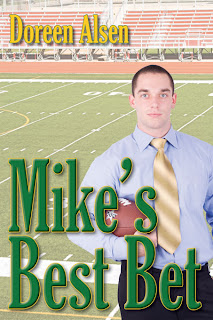 Yay! I got the galleys proofed and soon we'll have a release date for my first book, Mike's Best Bet, coming soon from the Wild Rose Press! This is the first book in my At The End Zone series.

He took his hands out of his pockets and held one out to her. “Dance with me.”
She shouldn’t, she really shouldn’t, but she made the mistake of looking into Mike’s green flecked eyes. They were so hot, they practically scorched her. Oh boy was she a goner. She put her champagne down, put her hand into his, and followed him onto the dance floor.
He put his hands on her hips and pulled her in close to him. She wrapped her arms around his neck and melted against him while the band played Duke Ellington’s “Prelude to a Kiss”.
Mike moved with all the elegance and grace of a natural athlete. The band’s alto sax lovingly crooned a hot melody that seemed made just for them. Andi sighed and lost herself in the moment.
It shouldn’t feel so good to be held by this man, but it did. He felt warm and solid and safe. Only traces of his after shave lingered, so her nose caught elusive wisps of wood and spice. His thumbs rubbed up and down on her hips, which made her shiver. He didn’t know the song, but hummed along anyway, off-key. She couldn’t remember when she last had heard more beautiful music.
The music ended. For a long moment they remained locked against each other, unaware of the applause that replaced the music. She looked up at him, then away. She didn’t want him to see more than she was ready to show him.

I will be back soon with a release date and info!
Posted by Doreen at 3:58 PM